(Which) Music to My Ears – Carrying Stones
Skip to content 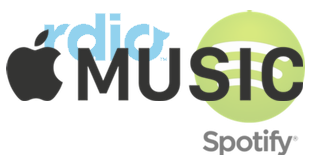 Rdio was my jam for a couple of years. A couple of months ago, Spotify offered a cheap deal and I gave it a shot. Now, Apple Music has bebopped into the mix. All three have deep catalogs to fuel a music marathon running in any direction.
Rdio is my favorite of the three, but probably won’t win back the top spot on my devices. The music service does social better than its competition. The app itself wins for its ability to control other versions of the app. By that I mean if a song is playing on my Mac, users can pause or change tracks from their iPhone and iPad or switch to play the track on their mobile device. Discovery is also pretty great. Search for your favorite artists and play a channel of that artist and others like them.
Spotify is more popular than Rdio, at least it seems to have more users. Maybe it’s because I cut my teeth on Rdio, but Spotify’s interface seems confusing to me. The playlists matched to activity is kind of neat, but it isn’t the first one to offer that feature. Songsta has done that for a while, and a new player in the field prominently shares the same sorts of playlists.
Apple Music also offers activity playlists and boasts human curation. It’s also the only service with anything like the DJ-curated Beats 1 Radio.[footnote]Don’t slip up and just call it Beats One. I hope the “online electronic and dance music radio station based in Calgary, Alberta” is taking advantage of any confusion.[/footnote] “Worldwide. Always on.” Curation by real people rather than algorithms is intriguing and helpful. Apple Connect is a huge improvement over the fruit company’s social flop by serving a different purpose than Ping—connecting artists to fans, not fans to fans. I’m still not sure how that will shake out, but so far so good in my opinion. I’ve found some good stuff in Apple Connect. The “For You” tab in Apple Music is another pro. Some of the playlists here have been perfect for me. Again, these are said to be arranged by real human beings who put thought into these lists like the cassette mixtapes of lore.
The problem with Apple Music, at least on the desktop, is that it is still a part of the monstrous digital hub that is iTunes, Apple’s answer to syncing, streaming, and managing apps, devices, podcasts, videos, movies, voice notes, TV shows, iTunes U, and more. There is a lot to deal with, both on OS X and iOS, so it’s confusing at first. I’m willing to learn.
Even with its warts and pain of the birthing process, the curation and deep roots in my digital ecosystem mean Apple Music is going to be my new jam.